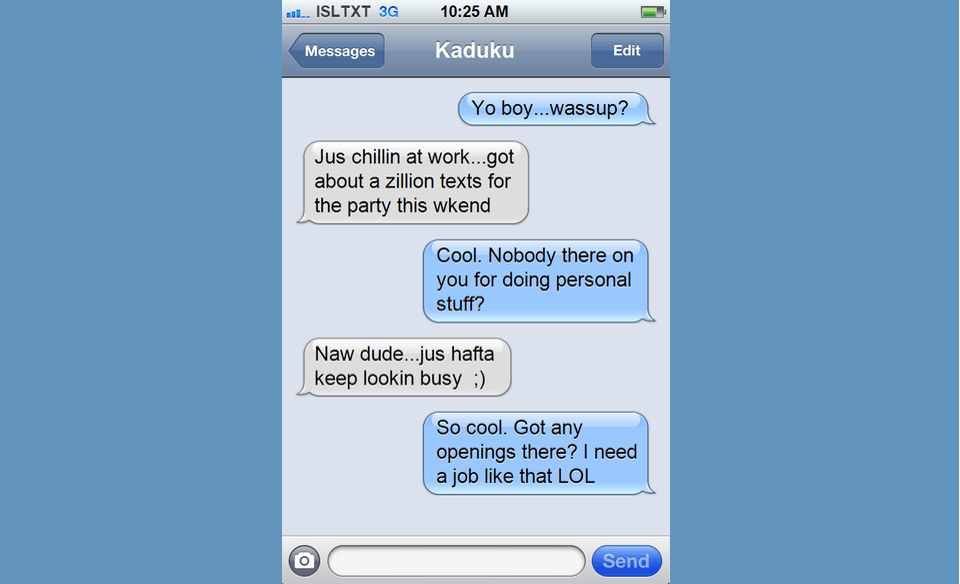 Fact: use is even higher in the next generation coming for jobs

Let me put those facts in perspective. A lot of those texts will happen during business hours, while you're paying people to work. If you think it's a problem now, wait until their teenage brothers and sisters show up.

The group coming to the workforce now and over the next decade or so has never known anything but getting most (if not all) of their information and entertainment from a phone. It's absolutely their lifeline to the world and not having continual access to it is seen as a major negative.

Here's another little nugget worth noting. Employee engagement is already extremely low. The Gallup organization is the world's largest workplace polling company and they've pegged it at between 25-35% for most industries. So, per Gallup, at the high point two in three aren't dialed into their job; or, using the low figure, three in four.

Mind you, these numbers represent an average of all age groups, including those who wouldn't send or receive 90 texts in a year.

Do you think it might be tougher to keep the attention of someone who lives their life through a phone?

We’ve been conditioned to drop what we’re doing and grab the phone when it rings, and especially when we hear the notification that we've received a text. It's not just the younger workers. I do it, too. How about you?

Russian physiologist Ivan Pavlov would have nodded in agreement.

Pavlov (1849-1936) did extensive research in the field of classical conditioning, that presenting a specific stimulus would result in a definite response. Whenever Pavlov fed his dogs he also rang a bell. After numerous repeats he just rang the bell, noticing that the sound caused the dogs to salivate. They had associated the bell with the food and were now conditioned to respond when they heard it.

It’s the same with phones. If it makes a noise, here we come.

We don't want to miss out on anything. Plus, we know the only people who send us texts know us, so by default any incoming text is a personal matter and may need our immediate attention. It's rare that a text is urgent in any way, but that's the mindset in play.

Simple texting has now been joined by apps such as Facebook, Facebook Messenger, InstaGram, SnapChat and the wildly successful Whatsapp, where group chats rage throughout the day.

The Time magazine poll came out in 2012 and use may be even higher now.

Breaking down the numbers, women used text much more than men. Overall, 32% of all respondents said they'd rather communicate by text than phone, even with people they know very well.

And a golden nugget came out, that this is truer still in the workplace. "No more trying to find time to call and chit-chat," is how one poll respondent described the business appeal of texting over talking.

That’s actually a positive for employers.

Is there any way to estimate the financial impact to employers?

Let's say 20-30% of the average worker's texting happens during their eight hours at work and requires about 30 minutes of their time daily.

If you want to run the math out, that 30 minutes each day times 5 work days equals 2.5 hours per week...and when multiplied by 50 weeks, equals 125 hours...or roughly three work weeks.

Then multiply the weekly salary and benefits times three to see how much their texting costs you.

Now how do you feel about it?

It's not an easy issue to deal with

I've heard managers say they prohibit personal phone use of any kind except on breaks, and that if people want to work there they will comply...period.

I suppose if your pay, benefits and perks make your organization so attractive that everybody wants to get in and nobody wants to leave, then you're free to make up any rules you like.

For the other 99.9% of employers, a different outlook may be in order.

Other managers have told me there's little they can do to prevent calls and texts, so it's not worth getting upset about so long as the worker is productive.

I tend to lean in that direction for a number of reasons:

1. Nobody wants to be a phone cop

2. Younger workers almost never challenge this point but likely will begin to disengage

3. Productivity is a positive and you can't ever have enough of those

One of the keys to cementing a good relationship with younger workers is to help them grow, then celebrate their success. Giving them a worthwhile task to do and then praising them for completion is a simple way to build a bond between worker and supervisor.

Workers who love their job will focus more energy on it

Does that make sense?

To learn more about how to create highly positive and productive working relationships, click here.

The bottom line here is that in the future phones will have even greater influence over our lives, and this will impact the workplace.

The only way to constructively deal with this issue is to make work more challenging and fulfilling. Let me know how you feel about all this by commenting below.

Spread the word — Thanks!

Do You Want Your Boss Calling at 3AM?

When You’re the Smartest One in the Room

There’s No “Just” in Your Job Title

Get Rid of Annual Employee Evaluations

The greatest speech ever made about work